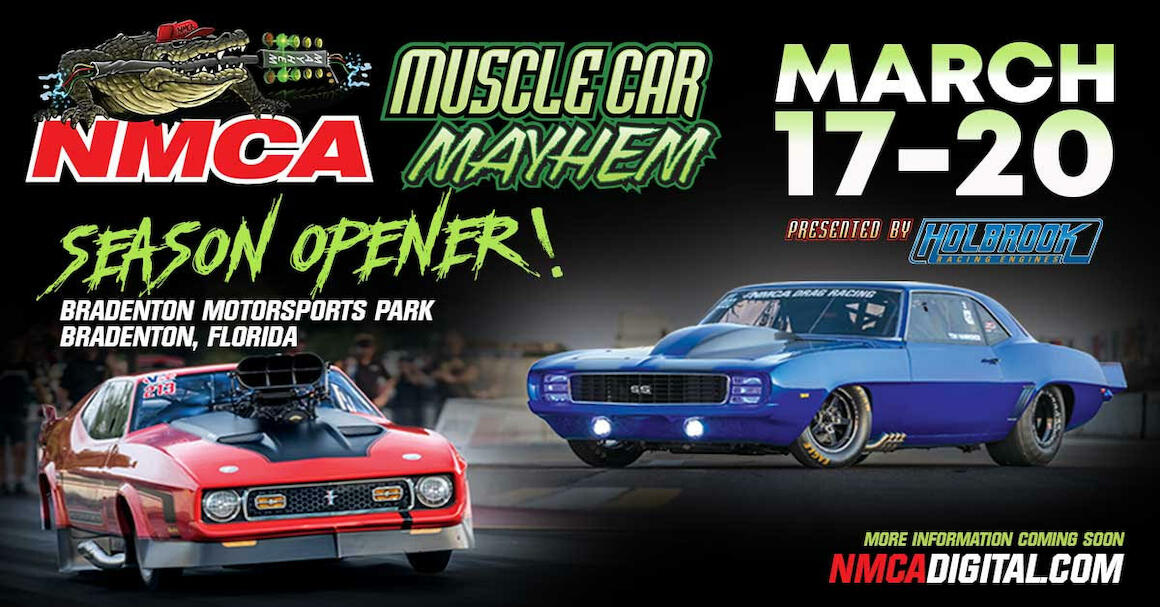 SANTA ANA, CA
nmranmcaevent@gmail.com
(714)444-2426
Refund Policy
EVENT HIGHLIGHTS
The NMCA Muscle Car Nationals begins its season at Bradenton Motorsports with the Muscle Car Mayhem throwdown that will have the ground shaking with 5,000hp VP Racing Lubricants Xtreme Pro Mods to TorqStorm Superchargers True Street and tons of other heads-up and index muscle car categories. Drag Week superstar Tom Bailey will host a special Sick the Mag Invitational with some of the baddest Drag & Drive cars on the planet! If you own a late-model Dodge HEMI vehicle then go over to NMCAdigital.com for a free entry to the Dodge // Mopar HEMI Shootout...hurry up because there are only 75 free spots available! The NMCA Muscle Car Mayhem event also includes a massive Car and Truck Show & Shine, a huge Manufacturer's Midway, and much more!

The NMCA Muscle Car Nationals Series starts its season over in March with the NMCA Muscle Car Mayhem presented by Holbrook Racing Engines, scheduled to take place at Bradenton Motorsports Park in Bradenton, Florida. As this is the first race of the season, the Northern-based competitors are chomping at the bit to feel some warm weather and get the racing season started. This event will feature one of the season’s largest turnouts, with racers showing up to compete in each of the NMCA’s eleven classes, plus a large contingent of True Street, Modern Hemi, LS/LT, and bracket racers.

Drag Week superstar Tom Bailey will host a special Sick the Mag Invitational with some of the baddest Drag & Drive cars on the planet!

Every year VP Racing Fuels Xtreme Pro Mod is one of the hottest classes at the NMCA season opener as these monsters turn up the boost, tighten the blower belts, and fill up the nitrous bottles to put on a show for Bradenton’s speed-crazed fans. Watch as Xtreme Pro Mod racers put their cars on the ragged edge and set their engine combinations “on kill” in search of the first win of the year that will put them in the points lead.

Want to Race Your Street Car?
Then you definitely want to enter TorqStorm Superchargers True Street, the perfect class for any beginner…because reaction time doesn’t matter. Join other True Street racers, with passengers, on a 30-mile NMCA-escorted cruise to prove the street worthiness of all cars in competition. Next hit the track for 3 back-to-back passes and then watch as NMCA presents cash and awards to the overall fastest, runner-up and to each racer with the closest average to 9, 10, 11, 12, 13, 14, and 15 seconds!

How would you like to experience the ultimate performance of your Gen III powered Challenger, Demon, Hellcat, Charger, or Jeep courtesy of Dodge / Mopar for FREE at this NMCA event? Dodge / Mopar will comp your entry (car and driver) so you can enjoy the incredible performance of your modern muscle car in a fun, safe environment…the racetrack. Dodge / Mopar and NMCA make your motorsport experience easy and fun with hands-on step-by-step instruction. 9 Different categories with awards and prizes for all levels of performance. Be a part of team Dodge / Mopar as we unleash the HEMI Shootout exclusively at NMCA events! Visit www.NMCAdigital.com for more information.

In addition to all of the action that will take place on the quarter-mile, the NMCA also has the awesome Car and Truck Show & Shine, which features over 100 class awards, from stock to modified, up for grabs! ’32 Ford with a late-model 5.0? Or a ’69 Camaro powered by an LS1? No matter what your flavor, there’s a place for you in the car show and a shot at the grand prize.

Each event also features a large Manufacturer’s Midway where you can see and purchase parts from the hottest aftermarket manufacturers and experts from all of the major manufacturers on hand to answer your questions about how to make your Ford car or truck perform to your expectations. There’s something for everyone the NMCA Muscle Car Nationals – make your plans to attend now!