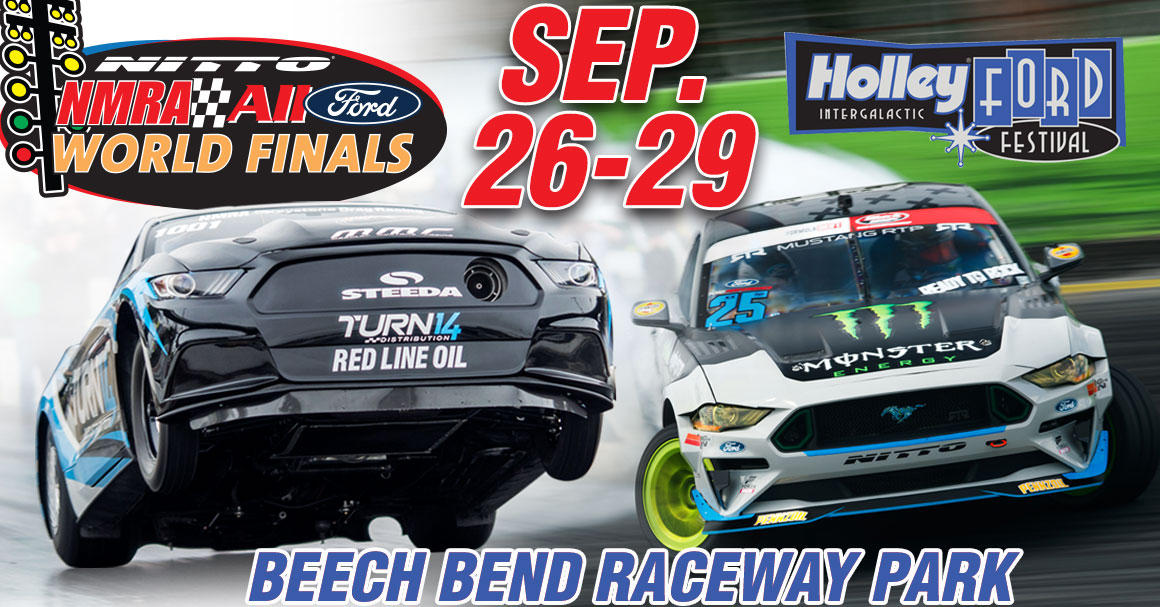 The 21st Annual Nitto Tire All-Ford World Finals and the Holley Intergalactic Ford Festival take over Bowling Green, Kentucky, the weekend of September 26-29, 2019. The town is painted blue as Beech Bend Raceway hosts the largest NMRA Ford Nationals event of the year. The final stop on a six-race national tour, the World Finals dishes out more power-per-Mustang than any other drag race with championship battles waged and specialty shootouts that pull-in the hottest niche Mustang groups showcasing their stuff in front of thousands of fans in the near-capacity crowd.

For the first time ever...Holley brings the ULTIMATE PARTY to the NMRA World Finals with the addition of the Holley Intergalactic Ford Festival. Watch as Vaughn Gittin, Jr. and teammate Chelsea DeNofa other Mustang drift warriors slide around Beech Bend's historic circle track with Autocross and Grand Champion taking turns on the oval as well. Meet Cleetus McFarland and watch as he roasts the tires on 'Neighbor,' his supercharged Crown Victoria as part of the insane burnout contests all weekend. The Holley Ford Festival also features the original Bigfoot monster truck, burnout contests, diesel truck tug-o-wards, dyno shootouts, increased drag race purses, and much more!

As usual, the World Finals also features a massive UPR Products All-Ford Car Show with late-model and vintage modified & stock categories. The largest all-Ford car show in Beech Bend Raceway history takes place Saturday and Sunday with over 800 show cars competing for 100 show awards presented to the finest Blue Oval machines. Hit the ATM on your way to Bowling Green for the best deals on parts anywhere...shop til you drop on the largest Manufacturers Midway of the year. Also, don't forget about the giant used parts swap meet with insane deals on everything you need!

Since street racing is illegal, NMRA's open to any Ford vehicle with its QA1 True Street field competition. Join 200 other True Street (pre-entry required) cars as a 30-mile road tour brings the festival of power to the streets of Bowling Green in the biggest horsepower parade in the towns history. The day concludes with gear-bangin fun on the Beech Bend Raceway quarter-mile for three consecutive runs down the track. The 3-runs are averaged together to create an average, of which the rankings list the final order. Eight winners are crowned from 7-second street cars up to 15-second nearly-stock Ford vehicles. There's a 200 car limit in True Street so pre-purchase is required.

Stacked with championship street racing from the quickest Fords on small tires, watch 2,000+ hp Street Outlaws and 1,500+ hp Renegades put it all on the line for the cash, the glory, and a chance to win an NMRA championship. It doesn't stop there as the quarter-mile warriors of Modified Street, Limited Street, Coyote Stock, and Factory Stock will put on a show you wont soon forget! Adding to the championship drama is the exciting Stick Shift Shootout, Turbo Coyotes, Terminators / Cobras vs. GT500 Shootout, King of the Street, and Much More. All this drag racing happens while the circle track is in full effect with Vaughn Gittin's Mustang set on kill and autocross Stangs shredding up the asphalt in between insane burnout contests and dyno shootouts. This is the MUST ATTEND Ford event of 2019!

The key to enjoying this Ford extravaganza is to plan early as hotels fill up quickly.